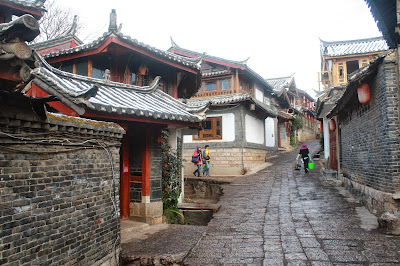 Where's Yunnan?  It's a province in south-western China, just above Thailand and Myanmar. Yunnan means "Cloud South" and it's a beautiful part of China. The part I usually live in is greasy with smog and filled with square concrete buildings with all the charm of cinder blocks, so it was nice to see a lovely side of this place I live.

First we went to a city called Li-jiang, part of which is old and historical. (See picture above.) It's full of winding cobblestone pathways that were made four to six hundred years ago.

After a few days we traveled a few hours to some mountains nearby, to a place called "Tiger Leaping Gorge."  So called because there were some rocks on the river over which tigers used to jump to get from one side to the other with small lambs in their mouths. But no tigers live there nowadays. 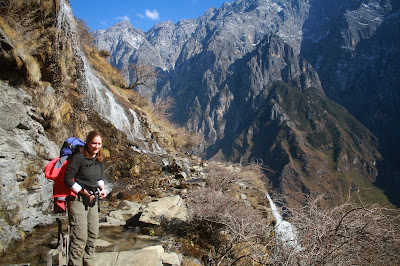 We hiked for two and a half days down this ridge of ancient mountains facing another ridge across the river below.  Pretty spectacular. Reminded us that God still has the gold star for impressive architecture.  Just being there was refreshing to the soul in a way even the lovely old town of Lijiang could not be.
Posted by Daniel at 11:35 PM