Today I visited some orphans. One of them was lying in his crib. As I walked by him for the second time, he fussed slightly.  I looked down at him. His eyes were slightly glazed, and the snot was dried around his small nose.

Part of me wanted to find some way to clean him up, but the rest of me felt icky about it.  I'm being honest here.  So I went to hold the hand of another kid and talk to him for a while, but I came back a few minutes later.  Bing started fussing again, trying to twist his head and body into a more comfortable position. I checked his feet, one of which was sticking out from under his blanket into the cool fall air of the room. I put a blanket over his cold foot.

He had squirmed his head up against the wooden rails of the crib, and was looking up at me, seeming to listen to me.  I rubbed his head for a few minutes, speaking a few soothing words to him.  He looked bad.  I heard of another baby that our friend JennLu watched die the other day. It was death-gasping for a few hours before it passed away in her arms.

So I leaned down and listened, but he seemed to be breathing calmly, with only a slight strain.  But there was something about him: he looked in a bad way.  Still somehow I felt he appreciated the head rub and words I gave him. I saw a bottle of thick milk nearby, so I grabbed it and put a few drops on his tongue. For a minute he just kept his mouth open with the thick milk drops on his tongue, then he closed his mouth and looked a little happy.

Thirty minutes later I was holding another kid, feeding him a bottle, when the resident nurse came and looked at him, and took him out to the clinic to see the doctor. She came in a few minutes later.

"He passed," she said. "He'd had some epileptic seizures this morning. The Chinese caregivers are pretty sad about it, still in shock." 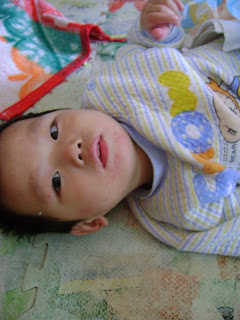 Lord, we commit into your hands this person I met so briefly. I know he is in a much better place. Please help us make the most of these few years of breathing you give to us. We are coming soon into Your eternal presence also.